“I am writing this for you.
My enemy.
My friend.
You know, already, you must know.
You have lost”(1).

What an opening, and oh boy, what a book.

The premise of THE FIRST FIFTEEN LIVES OF HARRY AUGUST by Claire North is basically that of the movie “Groundhog Day”, but turned up to 11. Certain individuals have the ability to live their lives over and over and over. They journey from birth to death and are then reborn to do it again, retaining their knowledge and awareness of previous loops. No two loops are identical, but history does generally proceed as we know it to do–unless someone with this accumulated knowledge of centuries of lives decides to change it. 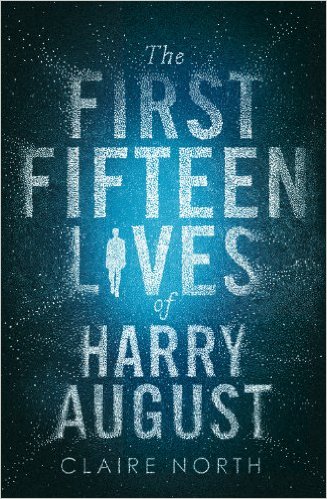 This book ticks off all the boxes of Holly’s Requirements for an Excellent Story. There is excellent story-telling craft, both on a sentence and a structural level. North took a complicated, cyclical kind of story and told it in the most wavy, non-linear way possible–and yet it is completely readable. This is writing with the difficulty on HIGH and North completely nails it.

AUGUST a time travel story that avoids many tropes of the genre. It’s really not about physical time travel but rather the spread of anachronistic ideas forward and backward across the continuum. It’s also the perfect marriage of fast-paced and thrilling with wells of deep thoughtfulness and intelligence, bordering on the philosophical.

The characters are real and nuanced, especially including the best supervillian I’ve encountered outside of a B spy movie….ever. I consider [REDACTED] to be a ‘supervillian’ in that his plan basically involves destroying the world and ultimate power. And while his science is a titch hand-wavy, he’s a grounded and sympathetic character…ya know, in addition to his psychopathic tendencies. The title character Harry August comes off a little detached sometimes, but to me that’s a perfectly understandable reaction to multiple lifetimes of trauma.When death is no longer the ultimate fear, chronic pain and memory loss become much scarier.

Lastly, the suspense is incredible. The first half is intriguing and flows between situations from Harry’s first few lives to set-up the main conflict and the rules, and then the second half deals mostly with the villain. I had no idea what the outcome would be until five pages before the end of the book. FIVE PAGES. It really could have gone either way. That’s suspense and tension done superbly, ladies and gentlemen.

I don’t want to say much more about this book, for fear that I will give something away that you, dear reader, should discover on your own. Short answer? I loved it. Go read this book, and Claire North’s other title TOUCH, a body-snatching thriller I read earlier this year and also thoroughly enjoyed.

I leave you, like the book, with this thought:

Go find it on Amazon, B&N, your local library, and elsewhere.

(Side note: The villains’ names all begin with ‘V’. What is it with villains and the letter V, across all media???)

Happy World Ballet Day! Like most people I have a complicated relationship with the art form. I hope to use my career as a choreographer to show how the ballet world could be, in spite of the way that it is.
We did it!!! Braved the rain and put on a rockin' outdoor show on the Starlight Stage. Thank you to all of my dancers and collaborators for helping make this next production of THE QUEEN OF NORI a success. We had a full house despite the inclement weather. Stay tuned for more media and the next phase of the project soon!
REHEARSAL
Get your tickets for THE QUEEN OF NORI this Sunday at 4:30pm or you might get this terrifying look from lead dancer Katie Bickford! (@kjjbickford ) Come see our original story ballet on the Starlight Stage in Central Square, Cambridge, MA on October 3rd.
HOPE
DETAILS
GENDER BENDING
MOVEMENT RESEARCH
THREE WEEKS FROM TODAY! On October 3rd THE QUEEN OF NORI comes to the Starlight Stage--reserve your tickets now! Here is a snippet of @dara_nicole_capley rehearsing the Act 2 Engineer solo. What responsibilities do creators have if the things they make are used to hurt others? Is there such a thing as "just followed orders?"
Loading Comments...
%d bloggers like this: