I’m a skeptical person. It doesn’t take long, when walking into a new situation, for concerns to seed, grow, and flower into doubts regarding the success of a project. It’s not that I’m eagerly waiting for people fail–I’ve just seen it enough times that I’ve developed a healthy caution for ambitious undertakings.

But at the same time–I love being proven wrong.

When I first got involved with the “Trumpets in the Quart”, the skepticism dial was turned up to high. Four choreographers for a 3-minute piece? Hmm. Ambitious one-day shooting schedule? Uh-huh. Lots of talk of ‘individuality’ and ‘your own spin’ from the non-dancer director? I see.

Nevertheless, I was drawn to the director Iara Benchoam immediately. It was clear she had a vision and a passion for the undertaking, no matter the complexity. We met to talk through ideas for the featured Tango my partner Jeff and I were to add, and I realized not only did she personally know the lead singer of the band for which the music video was intended, but the project had received a grant from Syracuse University–something that necessitated a detailed project plan.

The day of the shoot arrived, and despite some difficulties locating the sound stage caused largely by my own stupidity, I managed to get there on time and was whisked away for makeup. I’ll admit–I’m not particularly skilled when it comes to make-up. I never wear it daily, making me something of an outlier in the Office World. It is, however, quite fun to sit there with you eyes closed and let someone paint all over your face, especially if it comes out looking like this: 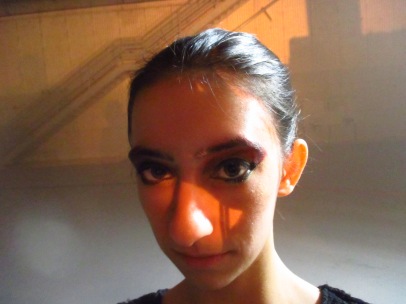 After make-up and a few short rehearsals, we began! The shoot was long, for sure–I was on set from 5:30 til 11:30pm–but it was never arduous. The set was also very cool:

One of the challenges as a dancer was to determine where my focus should be. In a theater setting, obviously the ‘front’ is the focus–the front being wherever the audience is. But on set, ‘front’ is not obvious. Sometimes look at the lead dancer/actress, sometimes look at Jeff, for the rest just don’t look at the camera? For me, it helped to treat the set as a ballroom dance floor, with ‘off-stage’ being in a round. Hopefully I’m not staring off in weird places in the final cut.

It’s wonderful to work on something where people are collaborative, professional, and enjoying themselves. While still university students, the production staff demonstrated ability and confidence. I got quite the buzz from discussing how to get the best shot and position with the Steadi-cam operators when it came time to do tracking and close-ups. I’m something of a closet film aficionado, function of growing up with an actual film buff mother, and as such watching the production unfold around me was a real treat. It was a fantastic experience, and I would love to do another!

I impatiently await the final cut to share with you all. And maybe by then I’ll have scrubbed all the gold off my face. Possibly.

For now, check out the Martina Trchova Trio‘s website and the song “V kvartě žestě.” It’s in Czech. Google Translate is your friend.

One thought on “Trumpets in the Quart: My First Music Video”