Time to talk about my eventful weekend. I wish I had better news. 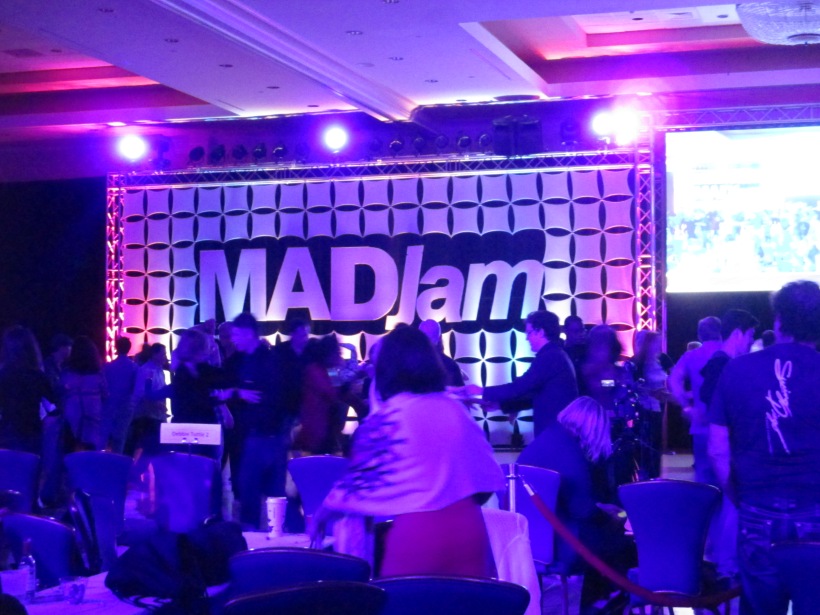 So this weekend Steve and I drove down to Baltimore for MADjam, one of the larger West Coast Swing competitions in the country. I’ve never been to Baltimore before, and I had imagined it a dingy, run-down place–not unlike Detroit or my current home, Syracuse.

Yes, I went there. Yes, it’s true. As a city, you should know you have a problem when people go “well at least it’s not Detroit! Or Utica!” [eye twitch]

Instead, I was confronted with tall buildings, clean sidewalks, and path by the harbor. There was an aquarium a few blocks down that I wish I had had time to visit. 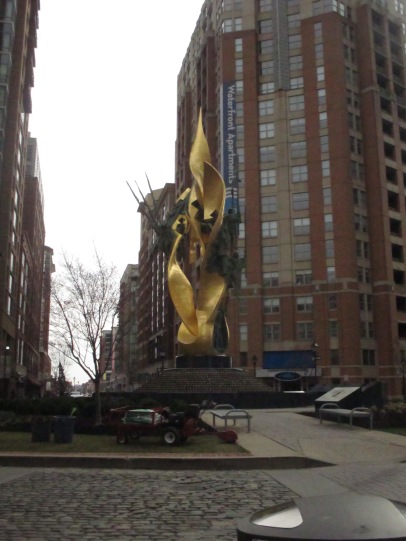 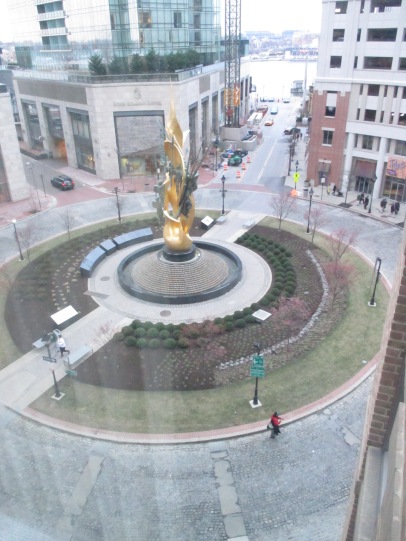 Granted, I only saw about two blocks of the upscale down-town area, but it was still nicer than expected. The weather stayed gloomy and grey, but at least it was warmer than home and not snowing. 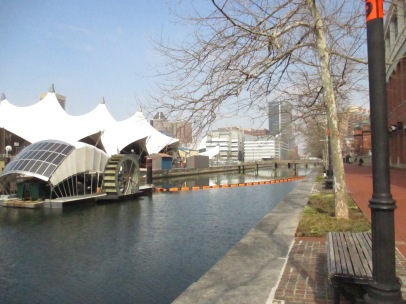 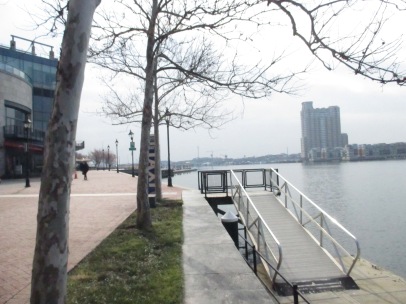 (Gawd my standards for weather are so low. If I were to move to California or Hawaii, I think my brain would overload from the nice.)

Saturday was fun–I attended a bunch of workshops and danced with all sorts of people. I am by no means the best social West Coast dancer, but there’s always this moment where, after doing some kind of spin, a light bulb goes on in the leader’s eyes, as if to say “oh! She can turn.” And then the difficulty suddenly ramps up, usually prompting the leaders to do more tricks, dips, and complicated turns.

There was one point where I was dancing with some fellow, and he did a couple illusion turns in a row, paused, and then did like six more. The glee on his face when I came back to face him was palpable and adorable. And yes, of course it’s an ego trip.  I don’t dance high-level WCS often, since my local area only includes a couple solidly good leaders, so I’m mostly accustomed to this phenomenon in salsa, the first social dance I learned on the floor. It’s fantastic to see the same thought-process happens in swing.

We also watched the professional performances Saturday night, which of course were phenomenal and fantastic. Reader, do yourself a favor and google that stuff–it’s so fun. 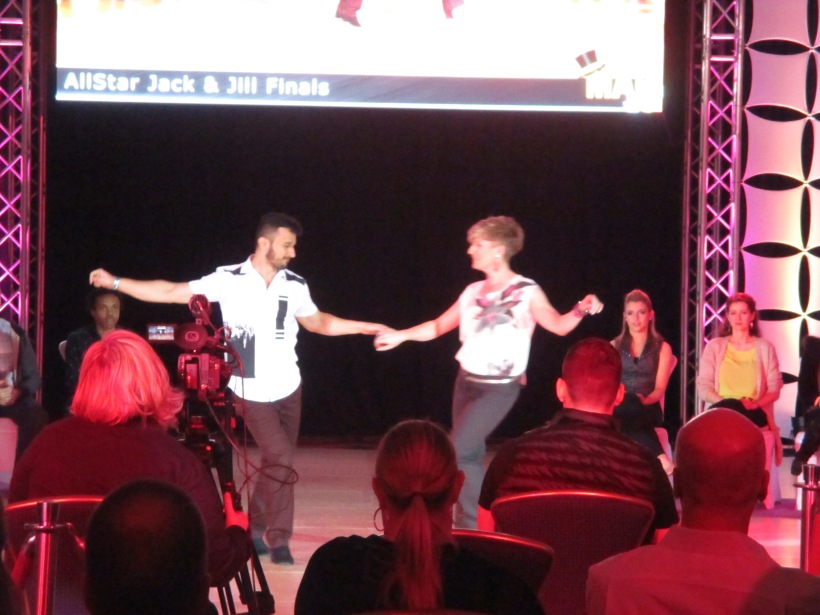 Sunday was rough. I got up and immediately started feeling…weird. I assumed it was just nerves–which is perhaps silly given my track record for lack of stage fright–but it got worse, and by the time we were supposed to compete, the world was spinning around me and my stomach was making a solid threat toward discharging its contents. Needless to say the routine did not go smoothly, and immediately after I spent some quality time in the bathroom.

I was going to put up the video, but I assume most readers have already seen the routine, so just find it in another blog post and watch, imagining me wobbling all over the place like an unbalanced top. That’ll about do it. It’s hard enough to do 16 turns in a row, say nothing of when reality is a blur standing still. Obviously we didn’t place.

I’m honestly not sure what caused it, though I am sometimes prone to bouts of nausea if I haven’t eaten enough or have eaten too much or have traveled. The weekend included all of those conditions, at various times, sooooooo…..[sigh]

But let’s end on a positive note, as despite the disappointment I refuse to admit the experience was all bad. The highlights of my mornings, both Saturday and Sunday, were yoga classes I took, courtesy of Dana Simonetti, a swing dancer and yoga instructor. It’s been a long time since I’ve taken a pure yoga class, and I had forgotten how much I enjoy it. I don’t have a ton of patience for the spiritual trappings at times, but it was still lovely to pause every morning, stretch, strengthen, and relax before a whirlwind day.

I am bad at taking days off, but today Sven and I escaped to the seacoast of Southern NH, and hiked, slipped on some rocks, poked the ocean,.and had some delicious seafood. Beautiful day ❤️🐟
The show is over, but the director's work isn't done. I am notating the entire show in StageWrite (@stagewritesoftware ), a theatrical app for graphically depicting movement on stage. I'm doing it now, while the show is still fresh in my brain, and this document will make my life easier when I restage the work!
I am still reveling in the afterglow of the work we did on THE QUEEN OF NORI. This beautiful image captures the intensity and focus of directing something of this scale, and I am so proud of all of my collaborators for their work in bringing the characters to life. We have gotten a number of questions on how one might support moving the project forward, and so there is a link in the top comment to donate if you so choose.
Very tired and very proud--the workshop premiere of THE QUEEN OF NORI has come and gone. It has been such a joy to create this piece with these humans and more, to be able to produce live dance in these our times of plague. Thank you to @thedancecomplex for rehearsal space, @amdanceburl for saving me on the performance venue, and to all of my collaborators for all the valuable assistance.
What responsibility does a leader have to her people? Come explore that and more with THE QUEEN OF NORI. Workshop performances are happening tomorrow, and I am by no means ready to stop playing in this world.
Residency day 4--today I got to see THE QUEEN OF NORI full run for the first time. I have such a cocktail of emotions, seeing this massive project finally come together! Thank you to all of my collaborators for your help and COME SEE THE SHOW. July 24th, Burlington, MA, tickets below.
Day 2 of residency and the Baladiri are up to some espionage! I'm loving the character development details we are finding and incorporating into the work.
Takes more than that to intimidate the Queen of Nori!
A bit of movement from our Litaran contingent! Litara is a coastal city-state, led by a bold young king, played here by @a.a.meeth. Come see how our three cities clash in THE QUEEN OF NORI, workshop premiere July 24th, 7pm, tickets in my bio and below!
Loading Comments...
%d bloggers like this: