Hello people of the internet! I hope you are doing well.

June has been….well it’s been a month. It turned into a bit of a blog-hiatus for me, not because I didn’t have things to say, but mostly because what’s running through my head lately is pretty repetitive. I’m trying de-tangle my life and goals for the next 8 months, and that’s proving tricky. Also, most of the time I’ve devoted to writing and editing has been eaten up by my attempts to learn Dutch before mid-August, when Sven, his sister, her fiance, and I are traveling to Iceland, Belgium, and the Netherlands.

At the very least I’ll be able to read the menus. (menu’s)

(Actually side note–so Sven speaks a bit of Dutch. At the rate we’re going, I’m going to know more vocab words than him, but he has the intuitive understanding of the grammar that I don’t. Mush us together and we’ll have the complete picture! …Or else just call for his sister, who actually speaks it…)

And I’ve been busy, predictably. Work, traveling, family life, family death, teaching, dancing. I feel great, physically. I’ve been taking four ballet classes a week for the past three weeks, and it’s both wonderful and frustrating.

July is shaping up to be a bit more relaxed–we’ll see how long that lasts before I go stir-crazy and lament getting out of shape. People of ballroom! If you’re reading this, we should talk about The Show I’m cooking up.

But I’ve also done a bunch of reading! Have a look at the four tomes I’ve picked up this month:

Oh Claire North, never stop writing. This book, the third in what seems to be a loose trilogy about identity and self-hood, was a thrilling, globe-trotting epic. I have to say, I didn’t enjoy it as much as her other two books, as it dragged on a bit long and the protagonist/antagonist relationships were not as defined as I have seen North do in the past. But still, I love her writing, everyone who likes thrillers, sci-fi, and suspense should check out HOPE and the other two North tomes.

PERV: THE SEXUAL DEVIANT IN ALL OF US, Jesse Bering 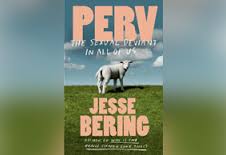 [sigh] How can a book about deviant sexuality be boring? That is the question I kept asking as I dragged myself through the mere 250 pages of this non-fiction exploration of why human sexuality is varied and bizarre. Of course, the fact of the matter is that no one knows why and this book spends way too much time talking about the extreme outliers, rather than your run-of-the-mill, everyday deviant. People (myself included) will pick up this book based on its claims of uncovering why fetishes and paraphilias exist–but those promises remain unfulfilled and unsupported. I found the chunk on the history of sexology interesting, but most of it I’d read before, and that alone was not enough to prop this book up beyond ‘meh’.

[happy sigh] I love me some zany British humor, especially in fantasy settings. This world-hopping, corporate-lingo-spouting satire recalls GOOD OMENS by Gaimen and Prachett, as well as the fourth-wall breaking of RED SHIRTS by Scalzi. I enjoyed the fantasy in-jokes and the absurdist humor–and it still manages to make points about capitalism, colonialism, and free will. A bit slow in the start, but I much prefer a book that speeds up toward the end than one that drags in the middle or fizzles in the climax. 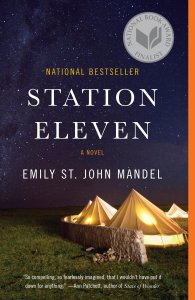 This is not a book I would have picked up based on the cover, if not for the fact I heard it’s virtues extolled on BookTube. It was pitched as the story of a group of traveling players after the apocalypse, but really it is that only in the loosest sense. A study in humanity, the role of art in crises, and the inter-connectedness of our lives, ELEVEN is in a way a ‘literary’ version of WORLD WAR Z. Now, for those of you not in the know, WWZ is one of my favorite books, and ELEVEN was emotional and wonderful. Don’t believe the dull tents on the cover, go read it.