My fervor for blogging has diminished of late, as my writing-energy has been focused on grad school applications. But not, it would seem, my desire for reading, as this month I have blown past my 50-book goal for the year, with no sign of slowing down. I am currently reading another book not listed here, but it’s 900 pages and I doubt I’ll finish it by Halloween. Nevertheless! Have a look at the ten books I read this month.

See anything that entices?

ADVENTURES IN HUMAN BEING, Gavin Francis

A non-fiction tour of human anatomy, author and doctor Francis connects each chapter with a different body area and patient story. My fondness for the medical memoir is long documented, and this book satisfied the interest without being overly memorable. I live for the day Atul Gawande publishes again.

THE MAN IN THE HIGH CASTLE, Phillip K. Dick

So this is one of those sci-fi cannon books that I felt I ought to have read. I don’t have much to say about it, as it came off a bit dated and flat. Only one character was remotely interesting, and as alt-history I give it a solid ‘meh’. Throughout it felt like a worse version of 1984.

The blurb on the front describes this thriller as “Chinatown meets Mad Max” and frankly that’s spot on. Set in a near future when water is scarce and the American Southwest has turned into a lawless free-for-all ruled by drug lords and state militias, KNIFE follows several characters as they struggle to survive and uncover a conspiracy revolving around water rights. Tense, violent, and unfortunately believable, it kept me guessing until the final page.

THE WRATH AND THE DAWN, Renee Ahdieh

The only thing worse than a bad book is a book with un-achieved potential. This atmospheric re-telling of 1001 Arabian Nights had the potential to be an enticing fantasy sprinkled with politics and romance. Instead, it feels like it can’t quite decide which way it wants to go, and lurches from side to side as a result. Shahrzad herself is well-drawn, but her brooding husband doesn’t get enough space to breathe and move much beyond romance-novel cliches–made even more frustrating since the novel goes out of its way in a couple of spots to deconstruct such tropes. The setting is beautiful, but the characters and plot left me wanting.

THE LONG WAY TO A SMALL, ANGRY PLANET, Becky Chambers 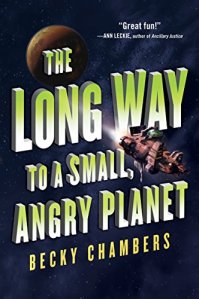 This is basically the book version of what could be a space opera mini-series that is the love-child of Firefly and Star Trek. Yes, really. A heart-warming, character-driven tale, it follows a crew of wormhole-makers on their journey through the galaxy. Every member has their story, a secret, and plenty to say about alien-human relations. Without giving too much away, this book has the best lesbian human-reptilian romance outside of Doctor Who. It’s got it all–characters, optimism, science, culture, and feels.

IN THE LABYRINTH OF DRAKES, Marie Brennen 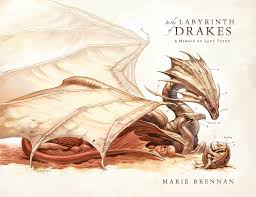 Oh, Lady Trent. How I enjoy you. The fourth installment in the Natural History of Dragons series, this voyage to a desert land in the hopes of breeding dragons contains Lady Trent’s usual commentary on the alternate-Victorian social mores and dry humor. I wanted a bit more from the romance, but the true joy in her scientific discovery at the end of book is worth the price of admission alone. These books have gotten more nuanced in their treatment of gender, ethnicity, and politics as  they continue, and I want mooooore.

EDIT: I just learned the fifth and final book will be published this spring, so excuse me while I go cry and save my money to buy the whole series.

Reminiscent of both Shirley Jackson and Ray Bradbury, this collection of short stories explores humanity, parenthood, and near-future-settings inundated with tech gone wrong. Each vision of the mid-twenty-first century is different, but all ask interesting questions about our current world and our relationships to technology and each other. If you are in to vaguely unsettling speculative fiction, check it out.

THIS IS WHERE IT ENDS, Marieke Nijamp

I don’t normally go for disaster novels, especially YA-aimed ones, but this short, multi-perspective look at a school shooting was the October pick for our library’s online book club. Obviously it’s tense and terrifying, but I found it predictable–and when tragedy is predictable, it comes off as emotionally manipulative and empty. Any disturbed teen/school shooting needs to do better than the skin-crawlingly creepy WE NEED TO TALK ABOUT KEVIN for it to receive the Holly stamp of approval, and ENDS does not.

A gaming industry gazillionaire dies a few decades in the future, leaving his fortune behind for the lucky soul who can find his virtual-reality Easter Eggs and crack the puzzles, all based on 1980’s pop culture. The blurb on the front says “Willy Wonka meets The Matrix“, and I would like to amend that to “Willy Wonka meets SNOW CRASH”, since the alternate reality is driven more by commerce and less by evil mind control robots. I think I would have enjoyed this more if I were a bit older–I was born in 1992 and therefore missed the 80s entirely, so some of the more obscure references were lost on me. Either way, a bit predictable and info-dumpy, but nevertheless a rollicking good ride.

I like to think of myself as careful with my opinions. I try not make judgements on things I haven’t read, and yet sometimes I do still end up with an egg on my face. A year or so ago, my friend Bethany mentioned she was going to read this book, and I scoffed, having ‘read somewhere on the internet’ that it wasn’t that great and wasn’t as feminist as it was touted.

Yeah, I know. Luckily I don’t think she took my advice on this one. [hangs head in shame]

Finally I have properly read LEAN IN, and I am quite pleased with the result. Is it a perfect feminist manifesto? No, but what text is? It’s a distilled version of a lot of what I’ve read online, yes, but it’s not watered down. I was pleasantly surprised at the amount of nuance Sandberg presented, and I encourage everyone in or out of the workforce to read it and think about company policies, unconscious biases, and distribution of labor. Change needs to come from both large-scale organizational shifts, as well as individual people in individual relationships analyzing their roles and needs. Go forth! Let’s fix the world.